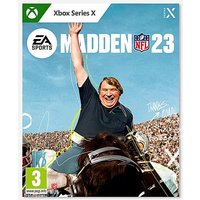 EA SPORTS Madden NFL 23 on Xbox Series X S introduces the all-new FieldSENSE Gameplay System which provides the foundation for consistent, ultra-realistic gameplay, and equips players with more control at all positions in every mode. FieldSENSE leverages animation branching technology and a suite of new user control mechanics for a seamless gameplay flow with authentic results on every play. Play your way into the history books in Face of the Franchise: The League where new position-specific mechanics are brought to life by FieldSENSE and player-focused cameras bring you closer to the action and add to gameplay depth by allowing you to dominate every snap, from anywhere on the field. Call the shots from the front office with updates to Franchise, and experience simplified team-building and convenient competition as you assemble the most powerful roster in all of Madden Ultimate Team. 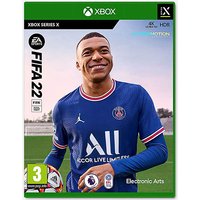 FIFA 22 for Xbox Series X - taking the game forward with groundbreaking next-gen HyperMotion gameplay. HyperMotion integrates advanced full-team data and machine learning to heighten gameplay, harnessing the power of next gen consoles to deliver the most realistic, responsive and fluid gameplay experience yet. New gameplay features include a goalkeeper rewrite that brings more composure between the posts, alongside new ball physics, more realistic explosive sprint, and new attacking tactics to control how your team plays. 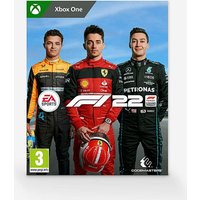 Enter the new era of Formula 1 in EA SPORTS F1 22, the official video game of the 2022 FIA Formula One World Championship. Take your seat for a new season as redesigned cars and overhauled rules redefine race day, test your skills around the new Miami International Autodrome, and get a taste of the glitz and glamour in F1 Life. Race the stunning new cars of the Formula 1 2022 season with the authentic lineup of all 20 drivers and 10 teams and take control of your race experience with new immersive or broadcast race sequences. Create a team and take them to the front of the grid with new depth in the acclaimed My Team career mode, race head-to-head in split-screen or multiplayer, or change the pace by taking supercars from some of the sport's biggest names to the track. 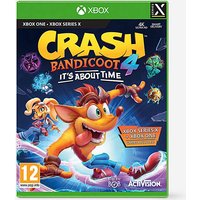 Crash Bandicoot Its About Time Xbox One.

Its About Time for a brand-wumping new Crash Bandicoot game! Crash forward into a time shattered adventure with your favourite marsupials. Neo Cortex and N. Tropy are back at it again and launching an all out assault on not just this universe, but the entire multiverse! Crash and Coco are here to save the day by reuniting the four quantum masks and bending the rules of reality. New abilities? Check. More playable characters? Yep. Alternate dimensions? Obviously. Ridonkulous bosses? For sure. Same awesome sauce? You bet your sweet jorts. Wait, are they actually jorts? Not in this universe! 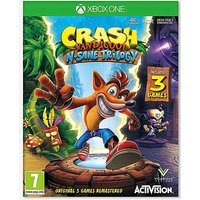 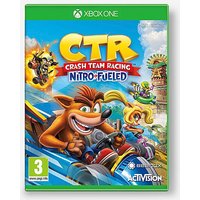 Crash is back in the drivers seat! Get ready to go fur throttle with Crash Team Racing Nitro Fueled. Its the authentic CTR experience, now fully remastered and revved up to then max Start your engines with the original game modes characters, tracks, power ups, weapons and controls Power slide to glory in additional karts and tracks from beyond the original game Race online with friends and Crash the competition with online leaderboards With Crash Team Racing Nitro Fueled, the stakes are high and the competition is fierce. Its the CTR you love now kicked into the highest gear. 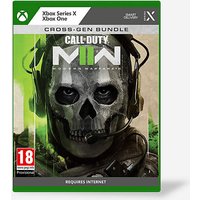 The Call of Duty Modern Warfare II Cross-Gen Bundle includes the Xbox One and Xbox Series X versions of the game. Includes Cross Gen Bundle of Call of Duty Modern Warfare II Includes Xbox One and Xbox Series X versions of the game . Welcome to the new era of Call of Duty Call of Duty Modern Warfare II is the sequel to 2019 blockbuster Modern Warfare. Featuring the return of the iconic, team leader Captain John Price, the fearless John Soap MacTavish, the seasoned Sergeant Kyle Gaz Garrick, and the lone wolf himself, fan favorite Simon Ghost Riley, players will witness what makes Task Force 141 the legendary squad it is today. From small scale, high-stakes infiltration tactics to highly classified missions, players will need to leverage new weapons, vehicles, and cutting edge equipment to take on their enemies. Gear up and take the fight offshore as you siege enemies underwater, breach a highly fortified enemy base, infil along the canals, and liberate much needed allies at a black site hidden within the mountains. Infinity Ward will immerse fans in heart pounding next gen, state of the art gameplay. Fight alongside friends in a truly immersive experience with stunningly realistic sound, lighting, and graphics that produce the most advanced Call of Duty in history. Modern Warfare II will feature a rebuilt, advanced AI system, enhanced rendering and photogrammetry technology, a new Gunsmith system, allowing for more customization than ever before, and a suite of other gameplay and graphical innovations that elevate the franchise to new heights. The future of the franchise is filled with trail blazing innovations and sets the foundation for next generation gameplay. 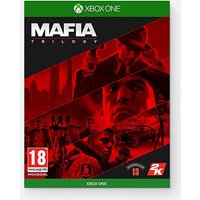 Xbox One Mafia TrilogyMafia Trilogy Includes main games and all DLC releases. Three Eras of Organized Crime in America Mafia Definitive Edition 1930s, Lost Heaven IL Re made from the ground up, rise the ranks of the mafia during the Prohibition era of organized crime in America. After an inadvertent brush with the mob cabdriver Tommy Angelo is reluctantly thrust into the world of organized crime. Initially uneasy about falling in with the Salieri family the rewards become too big to ignore. 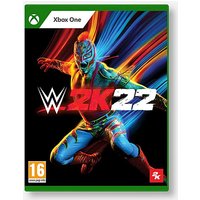 REDESIGNED GAMEPLAY ENGINE. NEW CONTROLS. ALL THE FEATURES YOU CAN HANDLE. Get ripped out of the stands and hit with complete control of the WWE Universe. THE GAME THAT MAY HIT TOO REAL - Hitting this hard has never been so easy. Throw down with the biggest and most realistic-looking WWE Superstars and Legends like The Rock, Sasha Banks, Goldberg, Brock Lesnar, and more. 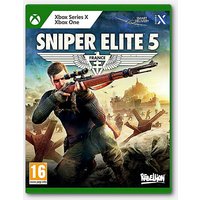 The latest instalment in the award-winning series, Sniper Elite 5 offers unparalleled sniping, tactical third-person combat and an enhanced kill cam. Fight your way across the most immersive maps yet, with many real-world locations captured in stunning detail, and an improved traversal system that lets you explore more of them than ever before. France, 1944 - As part of a covert US Rangers operation to weaken the Atlantikwall fortifications along the coast of Brittany, elite marksman Karl Fairburne makes contact with the French Resistance. Soon they uncover a secret Nazi project that threatens to end the war before the Allies can even invade Europe: Operation Kraken. EXPANSIVE CAMPAIGN: Many real-world locations have been captured using photogrammetry to recreate a living, immersive environment, and multiple infiltration and extraction points and kill list targets provide a whole new perspective on each mission. Take on the Nazi plot solo or work with a partner, with improved co-op mechanics allowing you to share ammo and items, give orders and heal each other. 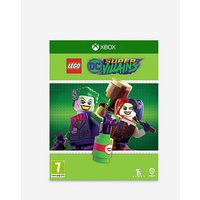 Embark on an all-new LEGO adventure by becoming the best villain the universe has seen in LEGO DC Super-Villains. For the first time, a LEGO game is giving players the ability to play as a super-villain throughout the game, unleashing mischievous antics and wreak havoc in an action-packed, hilarious story written in collaboration with DC Comics. Set in an expansive, open world experience within the DC Universe, the Justice League has disappeared, leaving Earth's protection to their counterparts from a parallel universe, who have proclaimed themselves as the 'Justice Syndicate'. Sometimes, it takes more than a superhero to get the job done and it's up to the player and a crazed group of misfits to uncover the intentions of Earth's new, strange, wannabe superheroes. Joined by renowned super-villains: The Joker, Harley Quinn, Lex Luthor, Deathstroke, Killer Frost, Sinestro, and countless others from the Injustice League, players will set out on an epic adventure to ensure their villainy remains unrivaled. 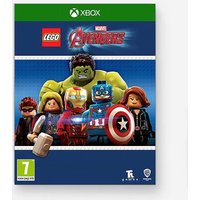 LEGO Marvel's Avengers: Avengers Assemble! Experience the first console videogame featuring characters and storylines from the blockbuster film The Avengers and the much anticipated sequel Avengers: Age of Ultron and more . Play as the most powerful super heroes in their quest to save humanity. 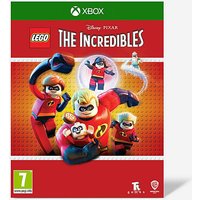 LEGO The Incredibles (Xbox One).

LEGO The Incredibles, a new video game where players take control of their favourite Incredibles characters in unforgettable scenes and action sequences from both Disney Pixar films, The Incredibles and the upcoming The Incredibles 2. The game encourages players to work together by combining the Parr family's abilities and unique powers to conquer crime and family life in a LEGO world full of fun and humour. With LEGO The Incredibles, fans can experience the non-stop action from both movies while fighting crime together as a super hero family. In LEGO The Incredibles, players explore action-packed story levels and an epic hub world, including Municiberg and New Urbem, as they use their unique super abilities to bring the city's villains to justice. 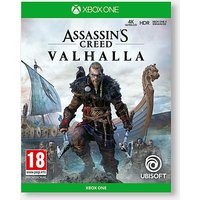 Become Eivor, a Viking raider raised to be a fearless warrior, and lead your clan from icy desolation in Norway to a new home amid the lush farmlands of ninth-century England. Find your settlement and conquer this hostile land by any means to earn a place in Valhalla. England in the age of the Vikings is a fractured nation of petty lords and warring kingdoms. Beneath the chaos lies a rich and untamed land waiting for a new conqueror. Will it be you? 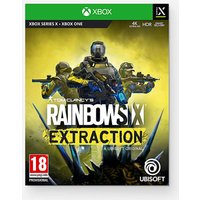 Tom Clancy's Rainbow Six Extraction is a one to three player cooperative tactical first-person shooter. Assemble your elite team of Rainbow Six operators to launch incursions into the unpredictable containment zones and discover the mysteries behind the lethal and constantly evolving Archaens alien threat. Knowledge, cooperation, and a tactical approach are your best weapons. LEAD ELITE RAINBOW SIX OPERATORS IN CO-OP OR SOLO PLAY: Pick from 18 of the Rainbow Six operators that are best adapted to survive the incursions. Each operator has a specific set of weapons, gadgets, and abilities to learn and master. With each mission completed, your operator will level up, boost their stats, and gain access to new loadout options and powerful combat perks.

© Price-Wizard 2023 (AZ). No material on this website may be reproduced without prior permission.